Two events caught my eye on Saturday in Tamaki Makaurau; Nepal Day and Block Party. I know they don’t really ‘go together’ but oh well.

Nepal Day was celebrated at Mt Albert War Memorial Hall.  I’m still unsure as to the significance of the date but perhaps it’s because it was close to the Nepalese New Year which is actually today (14 April). Celebrations all ’round!

I sort of assumed that it was going to be a day of colourful performances, culture and let’s not forget yummy food. In one sense I was right in assuming that, but I wish I had a heads up about the dress code. I did feel a little bit like a tourist (which didn’t help by myself and a friend hovering around the table sprawled with tourist brochures) surrounded by women and men in their national outfits. And Len Brown. And Sir Ray Avery.  Both in suits. We, on the other hand, were sporting a typical casual short/pant + t-shirt combo. Kiwi-styles. Well, we were just “keepin’ it real”…

So, backtracking to Sir Ray Avery.. he actually has a strong connection with Nepal having designed and commissioned Intraocular Lens labs there, making such technology more affordable to Nepalese citizens. (FYI – to save you Googling ‘intraocular lenses’, they are implanted in the eye to treat cataracts and myopia).  The Fred Hollows Foundation, to which Sir Ray Avery is the Technical Director of, provides 13% of the worlds market in intraocular lenses, which he gifted. He spoke on the day, something that I regret only catching the end of especially since I’ve been telling people that he was there all I’ve heard is “Ohhhh, he’s SUCH a GREAT speaker!”. Thanks guys. 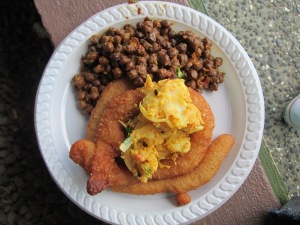 It consisted of a chickpea salad, fried bread (always a winner in my eyes) and I’m going to say some kind of potatoey salad? I’ll have to double check that. Nevertheless, it was delicious. I’m not sure where you can buy Nepalese food in Auckland but I’m sure going to try and find out!

So, after planning a future trip to Nepal and learning some interesting facts, we caught the train into Britomart to attend the Block Party held at the Cloud on Queen’s Wharf (after spending almost ONE HOUR to get an AT Hop card, but that’s another story…).

We love games and we love sunshine so the afternoon worked out quite nicely for us. There was an eclectic mix of things on show; music, large games (chess, connect4, jenga), table tennis, henna, second-hand clothes and trinket sales, drawing stations, photo set and cushions and rugs. There was also the cutest family doing some kind of impromptu photoshoot on the wharf which we loved watching also. 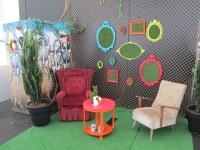 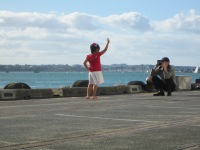 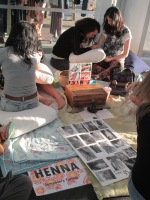 We played a large game of chess for what seemed like forever and yes, I lost. Neither of us had played chess for a while so we could feel (and see) people watching our game  and judging our tactics, or lack thereof. At least we had some local music to listen to and distract onlookers with. Very convenient indeed.

At the end of the day, we naturally detoured to Orleans for some chicken waffles (you have to try them!) before heading back on the train.

It was a great day learning about Nepal and soaking up the sounds on Queen’s Wharf and revisiting the innocent ‘old-school’ game scene.